The Future Office: What, Where and How Often?

Remote Working Should Continue Long After the Pandemic, But Probably Not Full Time 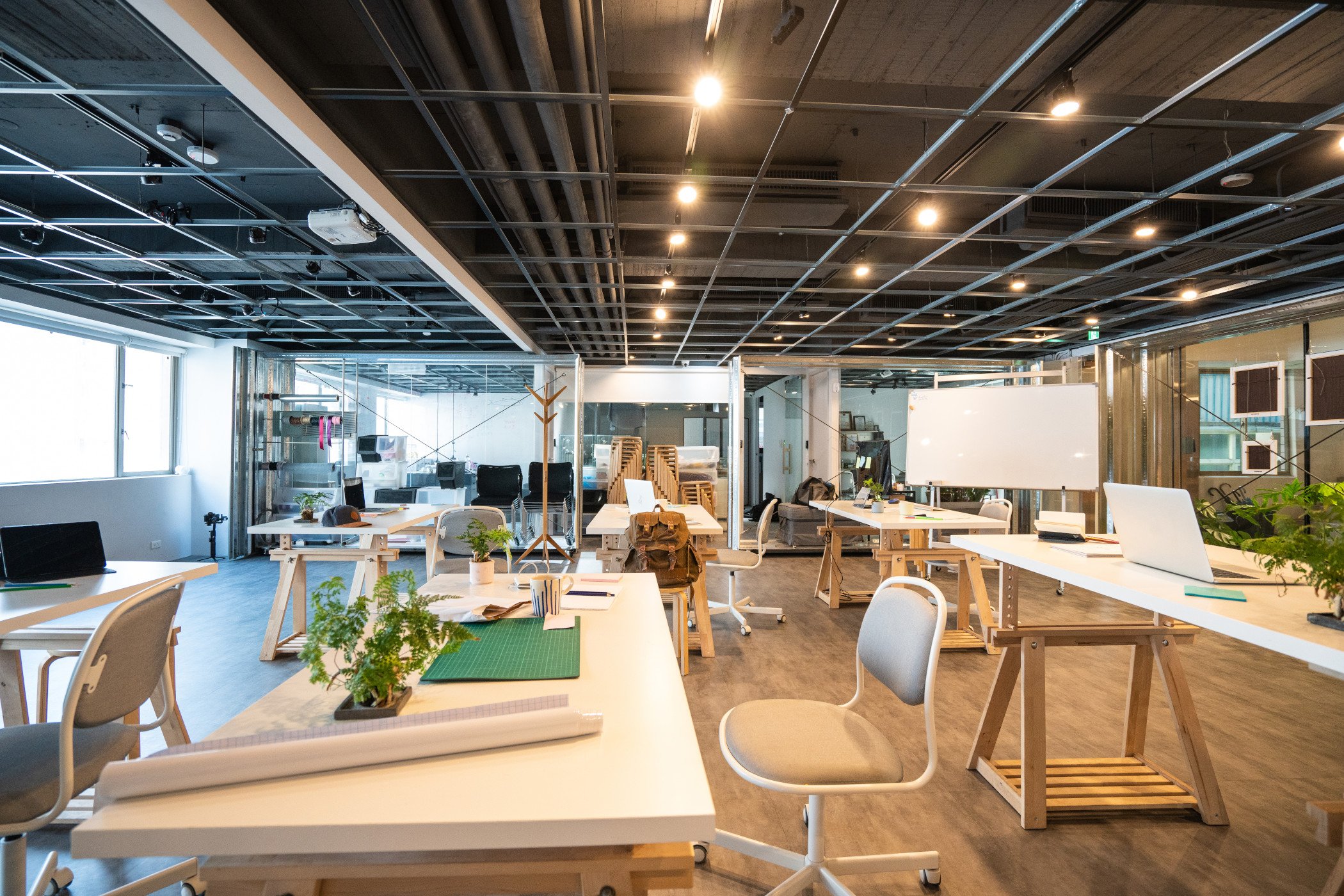 Clearly, there are benefits to working remotely and in the office, but how to strike the right balance? (Getty Images)

Just like that, we were all working from home. The coronavirus pandemic has forced us to change everything, from how we socialize to how we consume to how we work. For now, working from home instead of the office is out of necessity, but many have found the productivity benefits of a workforce that no longer needs to commute or is easily distracted by coworkers. These productivity gains have led some companies, such as Twitter and Facebook, to announce expanded work-from-home policies. But while there almost certainly will be more full-time remote workers, it is unlikely this will be done en masse.

While working from home does provide the potential for reduced real estate cost for companies, offices provide their own benefits that are difficult to replicate. A 2015 study out of Stanford University found that, while there were significant productivity gains from allowing workers to work four out of five days a week at home, roughly half of those workers chose to return to the office, saying they felt lonely and depressed working from home full time. These workers decided that they gained more from going into the office, despite an additional 40-minute commute on average.

Remote working does provide a productivity boost when a worker is doing individual work, such as coding or writing a report, but face-to-face contact is still important for collaboration. Sharing ideas and building a team culture and morale are all difficult to do remotely. A Harvard Business Review study found that remote workers communicated 80% less about their projects compared to workers in the office.

Clearly, there are benefits to working remotely and in the office, but how to strike the right balance? While every situation is different, we take a 30,000-foot view of what that may look like.

Working from Home Part Time Will Be Just Right For Most

Prior to the pandemic, 25% of the U.S. labor force worked from home at least occasionally, but just 8.1% did so one day or more per week according to a report issued last fall from the Bureau of Labor Statistics. The research and consulting firm Global Workplace Analytics estimates that 56% of jobs in the U.S. could be performed from home and that between 25% to 30% of the workforce will be working remotely on multiple days per week by the end of 2021, which, if proven correct, would represent a remarkable five-fold increase in remote working versus the pre-pandemic level.

Several recent employee sentiment surveys suggest that the optimal time spent working from home is only a few days per week. A June 2020 survey by career marketplace Hired.com revealed that while 35% of tech sector workers would embrace working from home full time in a post-lockdown period, and while just 7% want to return to the office full time, the majority, at 56%, would prefer to work from home between two to three days per week, or about half of the time. Likewise, in April, Colliers surveyed workers globally and across industries and found the vast majority, about 82%, desired to work from home at least one day per week, but the highest response rate, at 49%, was in favor of working only one to two days from home. And a Gensler survey of over 2,300 U.S. respondents across industries conducted in late April and early May found that only 12% wanted to work from home full time, while 44% did not want to work from home at all.
The remaining 44% wanted to work a few days from home. While survey results vary, it seems clear that a large share of the workforce desires the flexibility of working from home at least part of the time.

While employee sentiment is one factor in determining the right long-term remote working policy, employers are still the ones who ultimately make that decision. The policy that attracts and retains the most talent, fosters collaboration and innovation, increases efficiency, saves money and ultimately leads to the highest productivity should theoretically be the one most embraced by firms. Beyond the desire for part-time remote working, there is evidence to suggest that the utility of working from home plateaus at 15.1 hours, or roughly two days per week. After that point, the isolation from coworkers can lead to loneliness and blurs the lines between work and home life, which could erode the balance that many workers are presumably trying to achieve by working from home in the first place.

The seismic shift to working from home should begin to affect migration patterns across the U.S., but given that the vast majority of remote working will likely be on a part-time rather than full-time basis, we expect that the migration will mostly occur on an intra-market rather than inter-market basis. It is true that if workers were to work from home full time, there would likely be some shift to cheaper, more desirable markets.

The two states Californians are most likely to migrate to are Texas and Arizona, where apartment rents are 40% cheaper on average. On a per capita basis, Idaho and Nevada are the top two locations for residents leaving the higher costs of California. But as stated earlier, most workers will likely need to come into the office at least some of the time, which makes inter-market migration out of expensive coastal cities like San Francisco to places like Boulder and Boise less likely.

A shift farther out into the suburbs is a more plausible trend, as covered in a previous client update titled “Social Distancing: Housing Edition.” However, even if migration to the suburbs increases, that does not necessarily translate to office demand moving there as well. Transportation, amenities and companies are still geared towards urban-centric living and suburban offices are less accessible to workers living in other parts of the market. Additionally, the reduction in the days needed to commute per week may make the longer commute to the city more palatable than having to make the same trip five days a week.

If companies are looking to utilize the office more efficiently and maximize the benefits of both working from the office and at home, then what the office looks like going forward should also change.

Distancing Will Prevail in the Short-Term, but Agile Workplaces Are Still the Future

Given the wide popularity of remote working with employees and the general acceptance of employers that it is serviceable at worst, and even superior for some job functions, it is expected that office layouts will evolve once the threat of COVID-19 passes.

Collaborative functions that work better in the office than over a Zoom meeting will likely increase in the future. Trending in the opposite direction, the space dedicated to personal workstations is likely to decline since solitary tasks will be prioritized during the days away from the office. Client meetings, brainstorming with colleagues and informal meetups in the kitchen, hallways and lounge areas that can lead to productive, serendipitous encounters that firms hope to capture are examples of what works best in the office and what is more challenging to replicate virtually.

Perhaps the most pivotal question for future office demand will be whether the trend towards a more agile workplace, including “hot-desking,” will resume post-pandemic. Hot-desking, while certainly not feasible during the initial return to the office due to the risk of infection, would be the most efficient solution for firms adopting partial work-from-home policies. This practice had been poorly received by most workers prior to the pandemic and may not be feasible, even after a vaccine is in place, given the risk of spreading germs. That said, employees receiving a flexible arrangement that allows partial working from home may be more willing to accept hot-desking as part of the new reality in which virtually all employees are only part-time users of office space. However, it will be up to tenants and landlords to be thoughtful and creative in how they design future workspaces.

Each firm has unique needs and there will not be a one-size-fits-all solution. Best practices include creating neighborhoods that assign team boundaries to certain areas of the office without assigning seats, and allowing for team continuity and privacy while in the office. This is a design feature of activity-based working, a concept that has been around for decades, but gained popularity during the 2010s, and influenced the new wave of coworking operators, led by WeWork, that heavily incorporate the concepts of this style of workplace design into their spaces.

The meteoric rise and popularity of coworking prior to the pandemic suggests that workers are willing to embrace hot desking if it is presented in a way that appeals to their needs while in the office, reduces the anxiety of not having a dedicated desk and ultimately fosters a more productive work environment. Phone booths and quiet nooks for independent work; cafes and lounges for informal interactions; and huddle rooms, conference rooms and restaurant-style booths for planned meetings are all design elements that can be borrowed from coworking buildouts. Other, more subtle design elements can help program the space, such as the lighting, sound, color and partitions.

A recent report from Herman Miller notes that some near-term design changes will also work over the long term, such as touchless entry systems; improved air quality and ventilation; simplified design that is easier to clean; and relaxed density for the remaining workstations. Another key feature of the future office will be the incorporation of video conferencing capabilities throughout the office to facilitate communication between on-site and remote employees, since colleagues will need to work together both in the office and remotely moving forward.

Social distancing in the office will be a reality for as long as COVID-19 is an active threat. But this too shall pass. Market participants need to plan for not only the near-term return to the office, but also the longer-term implications of a permanent, increased remote workforce. In the post-lockdown era, if hot-desking and other agile workplace designs are eventually accepted as common practice and implemented widely, this would have the effect of substantially reducing the overall demand for office space.

While this may be bad news for the office market overall, there will be winners and losers. Modern, four- and five-star quality properties in dynamic urban centers should see demand hold up best, whereas average- to poor-quality assets may face an increased threat of obsolescence. Despite the near-term fears associated with dense, urban areas due to the pandemic, central locations have by far the greatest access to talent thanks to transportation infrastructure that is built to serve these areas. A world in which 30% of the workforce is working from home on any given day would also have the effect of easing congestion on highways and transit, making urban centers more attractive, not less.

Joseph Biasi is a consultant and Paul Leonard is a managing consultant with CoStar Advisory Services in Boston.